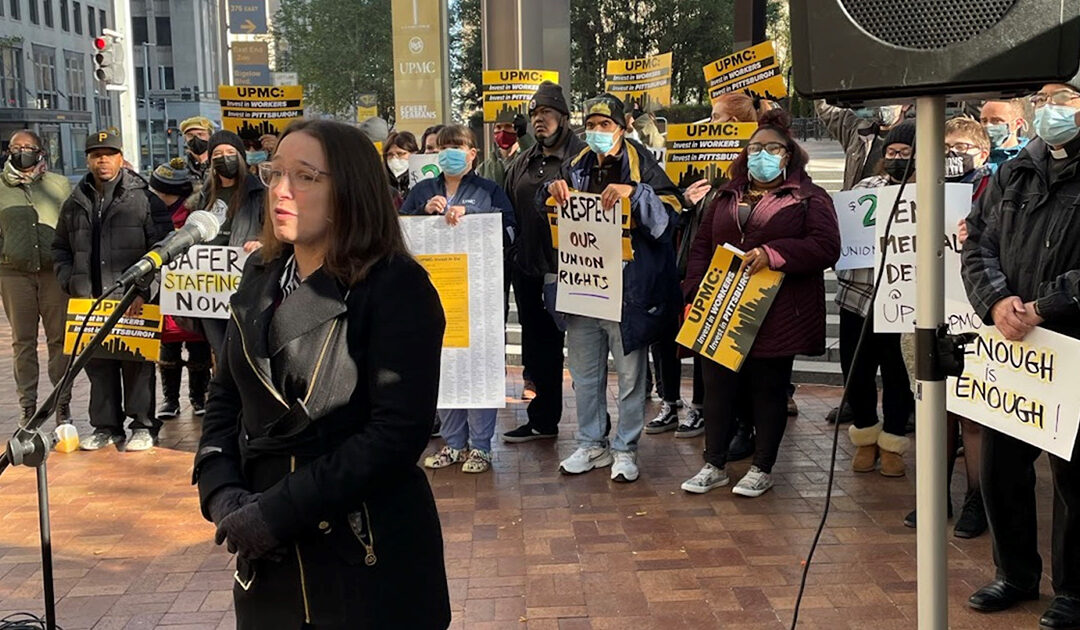 I’m proud to stand with the striking workers of UPMC. These Healthcare Heroes have gone far too long without fair pay, safe working conditions, affordable healthcare of their own, and the right to form a union.

As our region’s largest employer, UPMC has a responsibility to stop paying poverty wages to those employees. Wages are the biggest social determinant of health, and right now, Pennsylvanians are the ones footing the bill by subsidizing UPMC’s payroll. When employees have to go to the food bank to feed their families or go on public assistance to make ends meet, that means that all of us are picking up the tab. When employees at a hospital can’t afford routine medical care, each and every one of us makes up for it by paying a little more for our medical insurance. And UPMC isn’t just skipping out on paying its fair share when it comes to its workers. By being allowed to operate as a “non-profit” entity— despite posting record profits during a pandemic— they also aren’t paying taxes on those profits. Those tax dollars could be used to fund our schools and improve our infrastructure, to support our fire departments and protect our parks. Instead, Pennsylvanians are picking up the tab for that, too. Enough is enough.

These workers are frustrated and tired. They’ve been hailed as “healthcare heroes” for the last 18 months, but the best way to thank them for their sacrifices is to provide them with a living wage and the right to form a union free from retaliation by UPMC. If they had a staff union, they could sit down and collectively bargain for not only wages and benefits, but also for improved working conditions and safe staffing levels, which impacts every single one of us when we get care at a UPMC facility. We want to make sure that these workers are well taken care of so that they can take care of us.

UPMC has a long history of retaliation and unfair labor practices against employees who have stood up for themselves, their co-workers, and their patients. As a former whistleblower myself, I know it’s scary to continue to speak up after seeing your co-workers face retaliation, especially against such a large company. I applaud the courage of these workers for taking a stand.